After a one-week hiatus (I spent all day and night last Thursday packing for our most recent trip to Chicago), DTT is back with a vengeance. Well, at least we’re back with some super cute photos. In the midst of packing for our trip, I was able to snap a few shots of Elyse, our now seven month-old baby. So without further adieu, our little cutie pie: 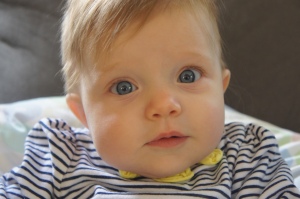 As her features become more prominent and she grows further along into infancy, Elyse is beginning to resemble her older sister, Clara, more and more. I, along with many others, have been noticing these similarities for quite some time. Seeing as Clara often mistakes her younger sister for herself in her own baby photos, I decided to conduct a little experiment. This month, I dressed Elyse in the same sundress that Clara wore during her own seven month photo shoot. I worked diligently to position Elyse as Clara once sat and did my best to capture the same expression. Below are the results of my experiment. Do you see any similarities between my two blue-eyed beauties? 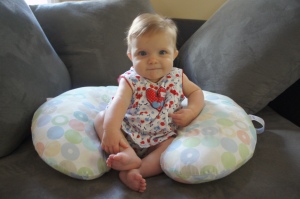 I often joke that looking at baby Elyse is like seeing another baby Clara. I just can’t get over how similar they are physically. The only major difference between the two at this stage in the game is their weight. At seven months old, Clara weighed over two pounds more than Elyse. Up until last week, Elyse wasn’t even on the weight chart. Thankfully, after amping up her diet with extra cereal and fruit feedings, Elyse is now in the 5th percentile. Hey, it’s a start in the right direction. Remember, she was born almost a month early, so it is going to take her some time to catch up to the rest of the pack.

If you look at the photos again, you’ll also notice that Elyse is being propped up with her Boppy pillow while Clara sits freely. Elyse isn’t quite ready to sit on her own just yet, but she did roll over from her back to her belly for the first time by herself on Monday while we were in Chicago. I must admit that I really enjoy watching Elyse become a little mobile being (I may eat my words in a few months, however). It was such a thrill witnessing her barrel roll across Jesse and Jill’s living room floor. Seeing her thrive makes it even harder to believe that this little munchkin was born at 36 weeks, 4 days and spent 10 days in the NICU after fighting off my antibodies in-utero for the better part of my pregnancy.

Temperment-wise, my two daughters are completely different beings. I remember that it took Clara seven months to sleep eight-plus hours at night. Thankfully, Elyse has taken it easy on me this time around and has been allowing me to sleep eight-plus straight hours for a couple of months now. She’s also a great napper — a skill that took much longer for her older sister to master.

They say that it gets easier with subsequent children. I often wonder if Elyse is really a better baby or if I’m just used to interrupted sleep and other infant challenges. The jury is still out on this one. I do know, however, that I’m enjoying Elyse’s infancy as much, if not more, than Clara’s. I’m chalking this up to confidence and complacency. I’ve grown very comfortable in my mommy jeans (ha! — I still wear my GAP jeans from before my babies came along, thanks to seven months of nursing and my obsessive running). They may be a little worn and faded in spots, but they’ve stood the test of time — much like my sanity during the last seven-plus months of parenting two under the age of three. On to month eight…

Up next week: Lessons Learned from Month Seven of Parenting Two!